This is what the first Festival 84 will look like: Night & day EXIT parties on 5 locations all over the mountain!

The premiere edition of the Festival 84 in the organization of EXIT Team will be held from March 15 to March 18 on Jahorina. All the visitors of the new winter festival can expect some of the finest original ingredients of Novi Sad Exit, officially the Best Major European Festival, arranged for a true winter festival partying on the Olympic mountain. Festival 84 will open with a special event and day party on Thursday, March 15, while true Olympic party starts on Friday morning and does not stop until Sunday, with over 50 hours of non-stop partying on a total of five daily and nightly stages all over Jahorina! 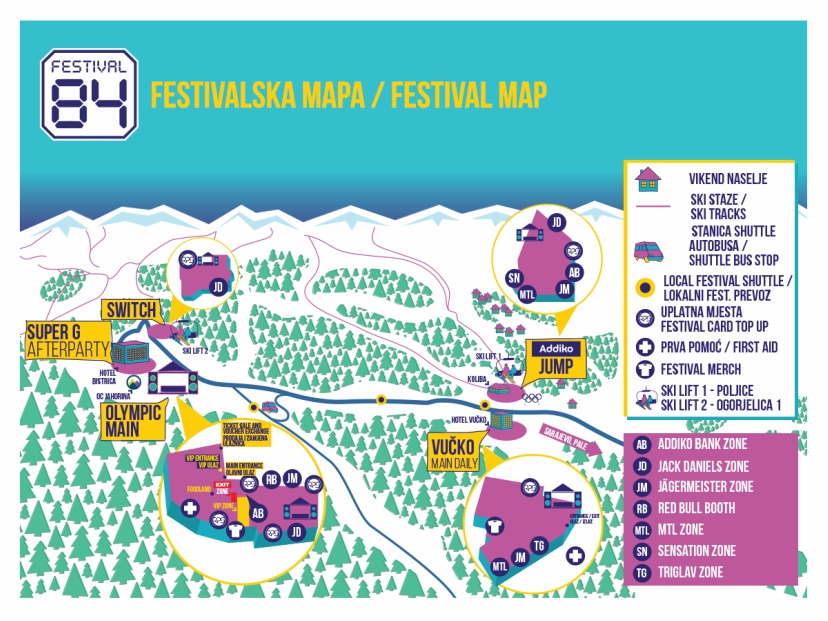 The Olympic spirit of 1984 will be brought to life on the main festival stage, the Olympic Main Stage, where some of the greatest names of electronic music will perform, such as Sigma, Asian Dub Foundation, Joris Voorn, Umek, Burak Yeter, Filatov & Karas, Mahmut Orhan, Patrice Baumel, as well as the stars from the region: Bad Copy, Forest People, Frankie, Kontra & Indigo, Helem Nejse, Van Gogh and Zli Jay. The fire of muisc at the main stage, located in a large prefabricated building outside the Bistrica hotel, will be lit on the two central days of the festival, March 16 and 17, from 20h, while the music program will last until 6 in the morning. Program at this stage will begin in the early morning hours and will last until 10, while the festival audience get to meet the club stars such as Siniša Tamamović b2b Mladen Tomić, Woodie, Billain, Forest People, A Skitzo, Worda, Soole b2b Robert S, G.EDD b2b Fedja Knajd, Forniva b2b Andrej Jelić and Black Acid b2b Vanyano.

There are no breaks at Festival 84 that will present three daily zones on the ski slopes! The main daily stage in the extended Exit Festival family will be located next to the Vučko hotel, and it will be open on March 16 and 17 from 11 am to 5 pm. The Vučko stage will be headlined by the German house titan, Sandrino, dubbed the new Dixon, as well as the leading regional stars: Marko Nastić in a b2b set with Dejan Milićević, and Kristijan Molnar, Alexander de Funk and After Affair. Visitors to the festival will be able to receive their portion of snow and sun at the Addiko Jump Stage, which will open and close the new event. This stage will feature the best international hits with popular regional DJ names during all four days. Those who prefer higher mountainous areas are invited to the Switch Stage, located at 1,560m above sea level at Ogorjelica ski-lift, which will present the best hip-hop, bass and d’n’b performers on March 16 and 17 from 10 am to 5 pm, such as MR. Mehikano, Merakoon, DJ Soul, Said 5, Helem Nejse and Kontra & Indigo, with special guest performances from the main stage, which are kept as a surprise!

Organized transport to Jahorina from Novi Sad and Belgrade

EXIT Trip, the official tourist service of the EXIT Festival has organized the transport for all the visitors to Jahorina coming from Novi Sad or Belgrade. All the information regarding the time and place can be found here. The trip from Belgrade or Novi Sad to Jahorina will last for 5-6 hours, and the tickets start at the price of 25 EUR.